Indigo Girls comes to Thomas Wolfe Auditorium on Wednesday 27th April 2022 to support their 2020 album release, Look Long. The album was released at the beginning of 2020, and finally, the fans will get to witness it live. This is the duo’s sixteenth studio album, and it has been a massive hit among fans and music critics. The tour began on 26th March from Florida and will wrap up on the last date of the year at Atlanta’s Symphony Hall. This is one of the most extensive tours of 2022, and fans are looking forward to catching the legendary folk duo live. You can also be a part of this wonderful experience, but you will have to buy your tickets right now before they are all sold out! 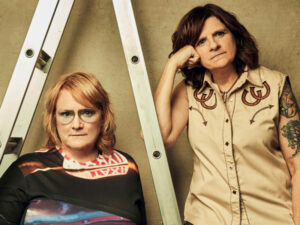 The duo’s sixteenth studio album tells the band’s origin story. Look Long finds Amy Ray and Emily Saliers back in the studio after a long time, reminiscing of their personal upbringings and their overall journey of a career that has lasted for more than 35 years now.
Indigo Girls released their major-label debut in 1989, which sold more than two million units. It included hit singles such as “Closer to Fine”, and “Kid Fears”. It made them one of the most successful folk duos in the history of American music. They began playing at local clubs and followed to perform at some of the most iconic concert venues across America. The duo has produced sixteen studio albums, with seven gold, four platinum and one double-platinum certification. They have sold fifteen million records worldwide and have built a massive fan base.
The duo is known for creating a jubilant environment around their concerts with singalongs from the audience that often overpower the band with their enthusiasm. Being in the moment and enjoying quality music is a trademark of an Indigo Girls event. Over the years, they have retained their ability to light up crowds with their performances. Catch them live at Thomas Wolfe Auditorium and experience an incredible musical performance. Get your tickets right now before they are all gone!